Should I Use Dog Training Treats When I Train My Dog? 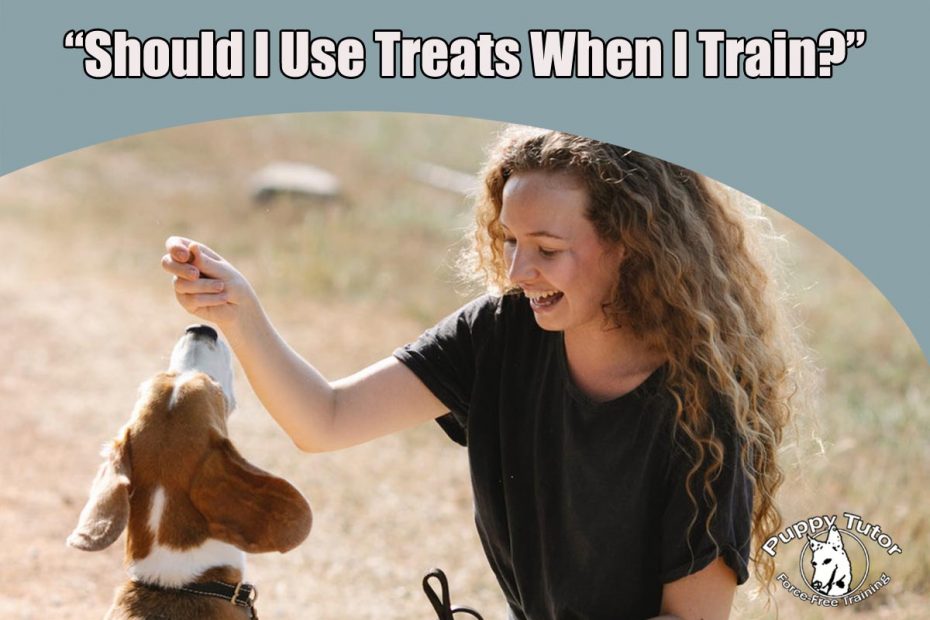 Have You Ever Seen This?

Someone asks their dog to “sit”. The dog just stares at them.

Finally, the person pulls out a treat and asks for “sit”. The dog sits.

This is what bribery looks like. If you see this, something has gone terribly wrong during training.

Every once in a while, I will come across someone who does not believe in using food when working with their dog. The general reason for it is that they don’t want to have to bribe their dogs in order to get them to listen.

This is totally understandable. And it would be a good argument against using food in training…if it were valid. But it isn’t.

Unfortunately, if you have to resort to bribery in order to get your dog to perform, then you haven’t been using the food correctly. So, the issue isn’t the use of food. The issue is the inappropriate use of food.

Typically, when using food in training, a trainer will “lure” a dog into the desired position. Then the food will be given as a reward for performing the act. The problem of bribery arises if you get stuck here after the dog has learned the behavior.

Getting around this is easy: Simply stop luring the behavior once the dog has learned it. Remember, the sole purpose of the lure is to help a dog figure out what is being asked. Once that has happened, the lure is no longer needed.

So, once your dog is reliably performing the behavior with the food lure, you want to turn the food into a “reinforcer” instead.

The Use of Reinforcers

A “reinforcer” is something that is given to the dog after a behavior is performed to strengthen the behavior. It never becomes part of the equation until after the dog has done what has been asked. That means you don’t even want to hold it out where the dog can see it. It needs to be hidden. That way, when the dog executes the behavior as requested, the completion of the behavior is what triggers the appearance of the food.

Of course, food isn’t the only thing you can use as a reinforcer. In fact, you can use anything that the dog wants. Other options include: tug, fetch, chase, affection, or even other tricks that the dog loves to do.

Still, the dominant default for science-based dog trainers will be food when either teaching a dog new tricks or helping them overcome emotional issues. There are several reasons for this.

Since you dog needs food to survive, food has value in itself, and as such is a primary reinforcer. Because it is a primary reinforcer, it is relatively easy to pair it with a separate stimulus that has no inherent value, such as a clicker. For example, in training, the sound a clicker makes becomes valuable to your dog because it is a promise that food is coming. Therefore, the clicker draws its meaning from the food, which makes it a secondary reinforcer.

So, food is a primary reinforcer, and it can be paired with other stimuli to give them meaning. This makes food doubly useful.

Food isn’t the only way to reinforce your dog’s behavior during training, but it is the most convenient.

Consider what happens when you use a tug rope instead. You ask your dog to “sit”. When you succeed, you pull out the rope and tug for about 10 seconds. Then, you reset the game, so that you can ask for another repetition of “sit”. All in all, you will get about 4 trials in a minute.

If you use food, it’s much faster. Plus, it’s easier to carry a few treats in a baggie than toys.

3. It Helps Kick in the "Seeker System" of the Brain

If your dog struggles with fear and reactivity issues, when they are triggered their amygdala in their brain is hijacking their ability to think. Once the amygdala kicks in, your dog enters into “flight or fight” response and cannot reasonably be asked to respond to most cues.

Because food is a primal need, it can be used to jump start your dog’s “seeker system” of the brain, which draws it out of the amygdala. Once your dog has begun to puzzle out how to get the food you just scattered in the grass, you can then help reorient your dog so that you can avoid another amygdala takeover.

Remember, you’re not feeding your dog during training. You don’t have to give big pieces. In fact, I suggest you avoid large bits in favor of small ones.

The standard wisdom for how large a training treat should be is about the size of a pea. Of course, this actually depends on the size of the dog. If you consistently give teeny-weeny pieces to a Saint Bernard, they may stop working for it.

You want to find the right size for your dog. If you are using a higher-value treat like cheese, you can generally use smaller pieces. Whatever you use, it has to be something that motivates your dog to perform.

And don’t forget: if you go through a lot of training treats, you will want to skim off the top of your pup’s daily food. It’s important to keep your dog at a healthy weight.

Show Me How to Do Science-Based Dog Training
Facebook