Are Leashes a Form of Punishment? 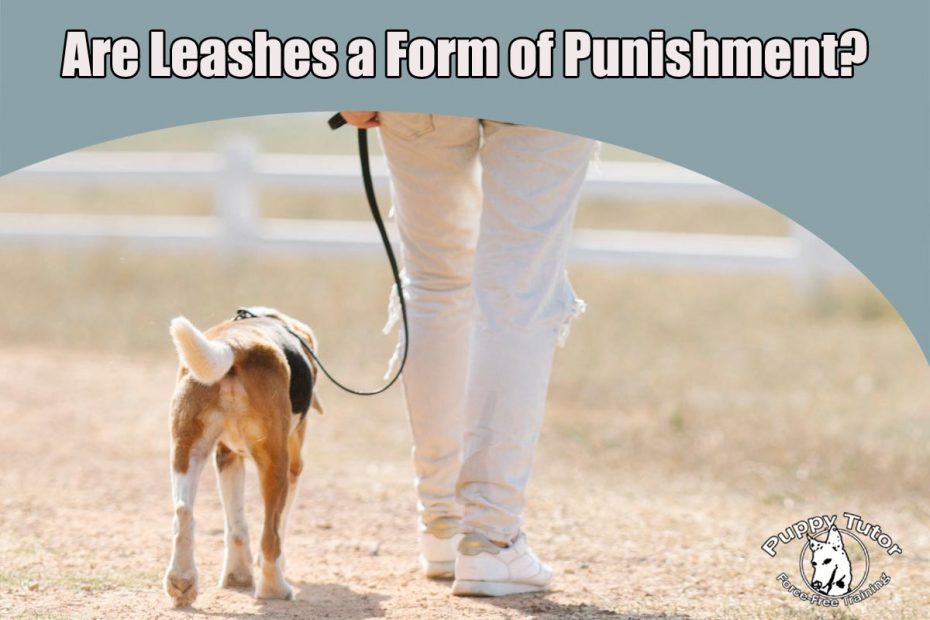 “There's no such thing as ‘purely-positive’ training. If you're putting a dog on a leash, you're punishing it.”

When I saw that on social media, I was completely baffled.

I admit, It has been a few years since I came across this statement made by a balanced dog trainer, so it’s not an exact quote. Nonetheless, it’s very close.

It’s clear her comment was based entirely on a gross misperception. To be honest, I don’t know how common this misperception is. My hope is that it was an isolated incident. After all, I haven’t seen that specific assertion come up again.

Let’s begin here. For better or worse, the answer depends on who you talk to. Let’s look at a couple different understandings.

On the one hand, our culture seems to have a fuzzy definition of the word. In many instances, people equate punishment with the intent to hurt another in order to stop unwanted behaviors. For example, a parent might spank a child so that they learn a lesson, which is don’t do the thing that the parent didn’t like.

However, too often I think punishment is equated with vengeance. So, one might punish a significant other for cheating by announcing the infidelity on social media in order to shame them after breaking up with them. In that situation, the goal clearly isn’t to correct a behavior at all since the relationship is over.

Unfortunately, I suspect that punishment as vengeance is the most dominant theme. In fact, it seems to often bleed into attempts to stop behaviors. The prison system would be good example of the two merging as one.

On the other hand, science describes punishment differently. This understanding is very precise and it relies on very different criteria: measurable effect on behavior.

A punisher is simply a consequence of behavior that decreases the likelihood of the behavior happening again.

The effect of a punisher is to cause the recipient to avoid doing the behavior that led to the punishment in the first place.

It does this is by triggering the fear networks of the brain in a way that leads to the prediction that bad stuff will happen when that behavior happens. If you avoid doing the behavior (aka, “suppression”), you will also avoid the bad consequence.

Note what I intentionally didn’t say in that description. I never mentioned “intent”. That’s because intent has absolutely nothing to do with whether something is a punisher or not. All that matters is the effect it has on the recipient.

It’s important to note that when science-based dog trainers are talking about punishment, they are specifically using this understanding. (Which is probably not surprising since they are using the best science we have to understand our canine companions. Hence, “science-based”.)

There are two basic ways to punish: (1) do something to the dog to trigger fear, or (2) take away an enjoyable thing.

(1) Do something to the dog to trigger fear

A good example of the first category is yelling at a dog who is barking. The idea is to yell loud enough to intimidate the dog (a form of triggering fear) into silence. Hitting a dog or yanking on a dog’s leash (leash correction) to stop a behavior is another possibility. Or, people might use a noise-maker or water bottle.

In order for any of these to work at all, they have to leverage the power of fear. The dog must realize that if they engage in the behavior again they will endure the experience again, and they must be afraid of the experience enough to suppress the behavior and avoid the consequence in the future.

(2) Take away an enjoyable thing

Let’s move on to that second category. This might happen while someone pets or plays with a dog and the dog gets over excited. If it starts jumping on the person, the person might turn their back on the dog, withdrawing their attention. While the dog is jumping to get closer and engage, the person disengages instead.

This is an unpleasant experience for the dog. If the dog stops jumping, it is because it is afraid the person will disengage again. Think of this as related to a “fear of missing out” (or “F.O.M.O.). The dog doesn’t want to miss out on the attention, so it doesn’t jump.

In both cases, the purpose of punishment is to change the behavior. More specifically, it stops the unwanted behavior from happening. Ideally, the dog will choose another, more acceptable behavior instead (which is where reinforcement comes in, but that’s beyond the scope of this article).

When trainers talk about “aversives”, we’re talking about the first category of punishers. Aversives include tools or techniques that leverage fear in one form or another. When force-free trainers say they do not use aversives, this first category (actively triggering fear) is what they mean.

That is not to say that force-free trainers do not punish. There are times that we want to stop unwanted behaviors. If we are not able to redirect a dog from the unacceptable behavior to a more acceptable one, then we may use that second category of punisher (taking away a good thing). The prime example of this would be the one I used above about turning away from a jumping dog.

How Do Leashes Fit In?

So, are leashes a natural form of punisher? It depends on how you use it.

It is common for balanced and traditional trainers to use “leash corrections” as a technique to stop a dog from engaging in unwanted behavior. If a dog barks at another dog, for example, the handler will give the leash a quick pop to send the message “knock it off”…with the implied “or else”. (A clear intimidation tactic.)

As I’ve noted, punishment is defined by its effect on a dog’s behavior. If the experience stops a behavior, it is by definition a punisher, even if that behavior is simply making the “wrong” choice. A correction changes behavior by leveraging the fear networks of the brain to trigger avoidance and suppression behavior, and therefore it is a punisher.

When I think back to that strange statement that started this article (“There’s no such thing as ‘purely-positive’ training. If you’re putting a dog on a leash, you’re punishing it.”), I suspect that the trainer was referring to the idea that a leash takes away a dog’s freedom. Perhaps she was referencing the idea that taking away a good thing is one way to punish. (At this point, I admittedly assume the trainer has an actual idea of what punishment is, though I realize it may not be the case.)

But, we then have to ask, “What behavior is being stopped?” Is the punishment meant to stop the dog from wandering too far on future walks? Of course not. From a science-based perspective, that makes absolutely no sense.

More than likely, the trainer either doesn’t understand what a punisher is, or she was so into to using a leash as a tool for corrections that she simply could not imagine any other way to use it.

If a dog is not trained for certain circumstances, it is unfair to expect the dog to perform appropriately in those circumstances. This is where management comes in.

Basically, management is about manipulating the environment to keep a dog from engaging in unwanted behavior. Gates (barriers that establish a boundary) are a great management tool in many cases. If your dog gets overexcited when guests come over, you could have your dog in an adjoining room separated by a gate so it can’t reach people to jump on them. If you are potty training a puppy, you might have gates up to keep it out of the rooms you don’t want accidents in. When you need quiet time to focus on work, you might have your dog behind a gate in the kitchen with an interactive feeding toy.

In all those instances, the gate serves a specific purpose: it manages space. It establishes a boundary that limits the pup’s freedom to keep it out of trouble.

In the hands of a force-free trainer, a leash is simply another tool to manage space. It functions in the same way as a gate, except it establishes the boundary from behind the dog rather than in front of it. Force-free trainers never use leash corrections to intentionally punish (aka, “correct”) a dog. 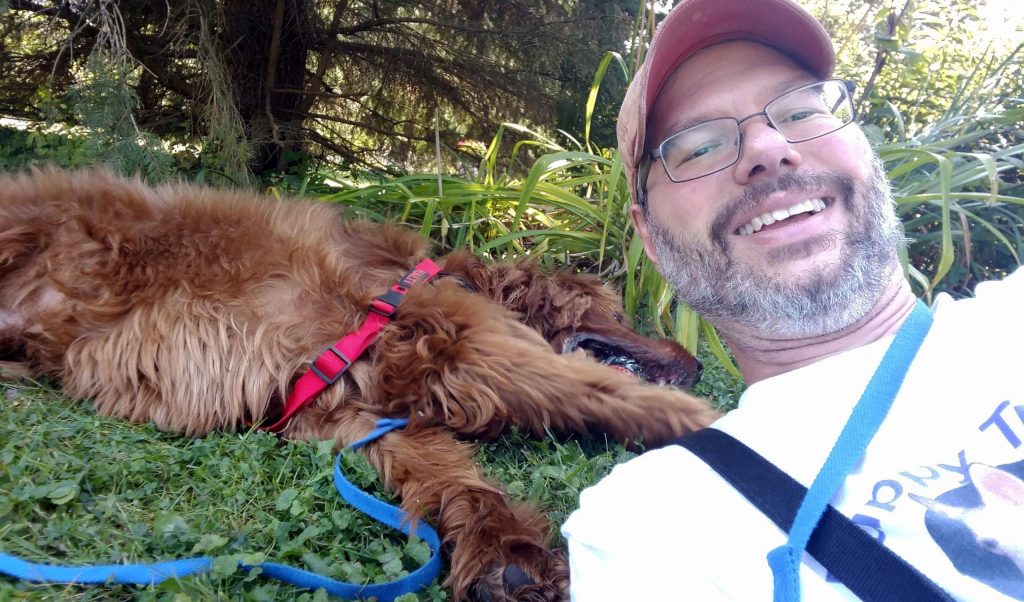 Quite frankly, when that trainer equated the use of leashes with punishers, she revealed that she had no idea what she was talking about. She obviously couldn’t see any way to use a leash other than her own aggressive methods.

When you are training your dog to walk nicely on a leash, the entire process should be fun for both you and your dog. That way, when the dog gets to the end of the leash, they bounce back because they joyfully want to, rather than a sense of “better do it…or else”.

If you want to learn my approach to loose-leash walking on your own, I’ve written an easy-to-follow, illustrated ebook as a guide. Once you learn the method, you can transform formerly stressful walks into joyful ones. Plus, the approach itself naturally facilitates a stronger bond between you and your canine companion.

As one reader has said…

This info is gold!

Remember, you never have to use intimidation, fear, pain, or violence to motivate your dog in your training. That means you never need to use leash corrections. You can use science and love instead.

Teach Your Dog to Walk Nicely on Leash through Fun
Facebook

Sign up for the upcoming newsletter and receive free dog-training and other dog-related information right in your inbox!